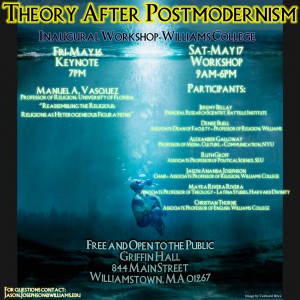 Since the 1970s much of the academy has labored under a particular form of linguistic skepticism (often called postmodernism or poststructuralism) that is directed at the destruction of stable conceptions of subjectivity and meaning. It is often said that everything is a text and that all knowledge is power. But just as the typewriter has given way to the computer and disco to dubsteb, as we exit postmodernity new philosophies are appearing on the conceptual horizon.

On May 16-17, this inaugural workshop will bring together scholars engaged in cutting edge research who will present their different prospective exits from the postmodern impasse. Often drawing on work in ecology, science studies, contemporary continental philosophy, radical theology, new materialism, feminism, neuroscience and complexity theory, these thinkers aim to reclaim knowledge of the real world, to suture the separation between the sciences and the humanities, and to overturn what they see as the dualism between matter (as dead or inert) and mind (as the locus of life and agency). By so doing, they often claim to empower the object-world and dethrone humanity from the center of philosophy. At stake is nothing less than the future of scholarship in the Humanities and Social Sciences. 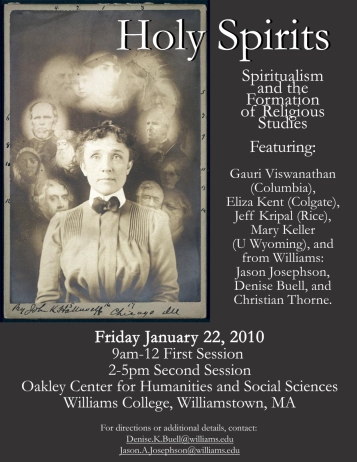 Holy Spirits
Spiritualism and the Formation of Religious Studies

Despite attempts to banish the uncanny to a pre-modern past, the figure of the ghost or spirit plays a distinctively modern role in the writings of seminal theorists of the nineteenth century (Hegel, Marx, Freud, and Durkheim). Spiritualism, which flourished in the latter half of the nineteenth century, can be interpreted as a kind of internal critique and supplement to modernity, legible especially in relationship to contemporary practices and debates about slavery, imperialism, and religious authority. Religious studies as well as other modern academic disciplines emerged at the same time as this fascination with the invisible and the spirits of the dead. That is, our field arose in a cultural context where spirits were lively objects of inquiry even as religious studies defined itself in contrast to spiritualism, psychical research, and theosophy. We seek to explore how spiritualism informed the objects of concern to and methods, priorities, self-definition of religious studies. Engaging the spiritualist and esoteric context of the disciplining of religious studies will not only illuminate what continues to haunt religious studies but also offer alternative ways of enacting and conceptualizing our field. We are explicitly interested in how approaching the history of religious studies from this vantage point opens up both a clearer understanding of ongoing ruts in religious studies as well as possibilities for transforming the discipline.

Covid-19 is an ongoing concern in our region, including on campus. Safety measures are in place, and campus community members and guests are additionally advised to take personal precautions. See the college's Covid-19 website for information about campus policies. For the latest research and recommendations from the CDC, visit cdc.gov/coronavirus.